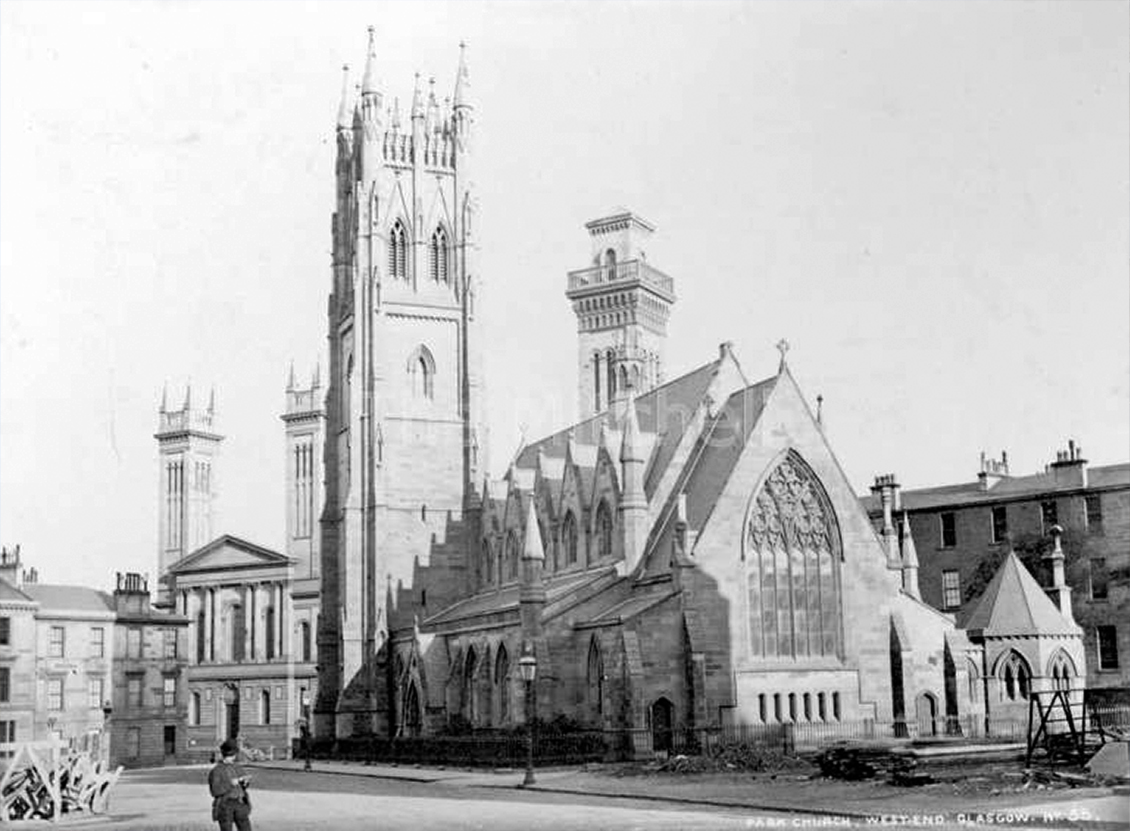 Two sunny days separated by 150 years. The three towers of Charles Wilson’s striking mid-Victorian former Free Church College peek out from behind the now orphaned tower of Park Church in our first image. Wilson is best known for his design of the Park development on Woodlands Hill, rising out of what is now Kelvingrove Park. Despite it being a separate commission, he designed the college to be the dominant feature of the Park district. The college incorporated a church in its eastern wing where the two smaller towers can be seen. The church was destroyed by fire in 1903 and its shell was subsequently acquired by the college to accommodate an extension. The extension, designed by Colin Menzies and rebuilt as a concrete vault, opened in 1911. It made possible a Library Hall at the level of the former gallery of the church and an Assembly Hall and two classrooms at ground level.

Park Parish Church, pictured here shortly after completion and while the rest of the area was still under construction, was designed by John Thomas Rochead and built between 1856 and 1858 at a cost of £8,000. It was a striking adaptation of West of England Perpendicular featuring a soaring pointed Gothic tower. The Ecclesiologist of February 1859 noted that it was “a remarkable structure, as marking the progress of ecclesiastical architecture in the Scottish Presbyterian establishment”. By the early 1960s the church’s congregation was on the wane and the Glasgow Presbytery drew up plans to flatten it and build a 12 storey £350,000 office development on the site. This was rejected as inappropriate and a marginally more sympathetic plan for a 6 storey block gathered around the retained church tower was approved instead. In a letter to the Glasgow Herald, New Glasgow Society founder and secretary Geoffrey Jarvis wrote that he “welcomes the retention of the tower as an essential element of the skyline and realises that a valiant attempt has been made to match this unique building with a modern economic solution”. It perhaps gives an indication of how low expectations were that one of the fathers of modern Glasgow architectural conservation was prepared to concede the destruction of the church in order to preserve the skyline.

In 1968, despite much protest both from the public and the Glasgow Institute of Architects, the church was carefully demolished by hand in order to preserve the tower. In its place rose a reinforced concrete office block, designed for the Bank of Scotland by Derek Stephenson and Partners. Although now much remodeled, it remains, however, a jarring sore thumb in an otherwise remarkably complete expression of Victorian town planning.

Our other image is looking west at approximately number 13 Park Circus. More on that to come in the autumn when I can get some good comparison shots from the park without dense foliage obstructing the view up to Woodlands Hill.