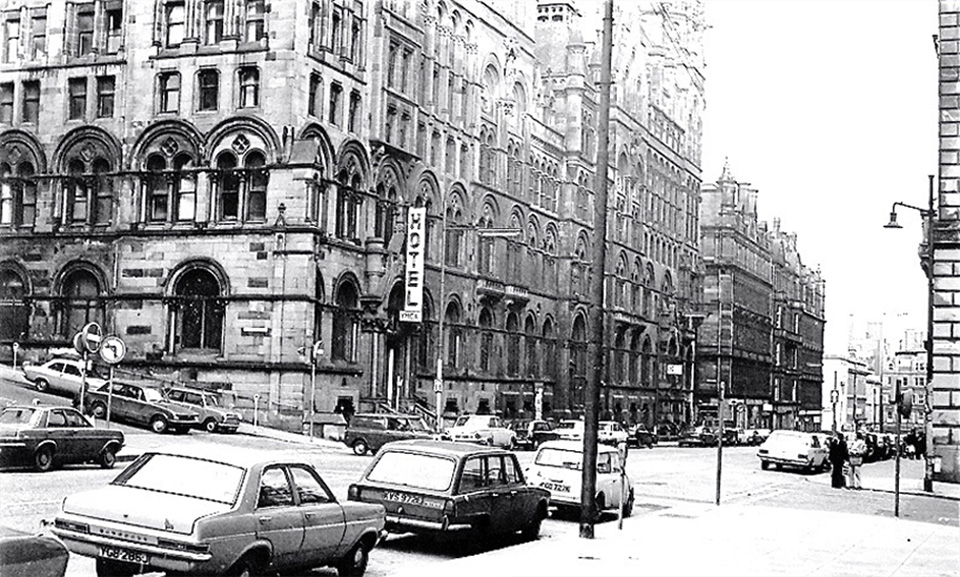 The fantastical Christian Institute building looms over 1970s Bothwell Street looking like the fever dream of a Bavarian prince. The building was conceived when, in 1873, a committee was formed with the intention of providing an institute for the Young Men’s Christian Association and “other bodies of religious character”. The group raised £28,000 and land was purchased on Bothwell Street. Architect John McLeod designed the original building in the German Renaissance style and it was constructed in 1879. It was opened in October of that year by Lord Shaftsbury. It featured statues of John Knox and William Tyndale above the doors, and above the windows on the second floor were medallion busts of Martin Luther and other reformers.

In 1895 a design was chosen by competition for the addition of two new wings to the building. These were constructed in 1896 for a staggering £115,000, financed largely by Rutherglen chemical magnate and philanthropist John White (Lord Overtoun). Architects Clark and Bell and R.A. Bryden followed the style of the original building but with soaring asymmetrical towers at each corner. The end result was a sprawling Gothic Revival pile that filled an entire city block. The east wing housed a bible training institute with 100 bedrooms for male students and 50 for female students. There were also separate dining, sitting and writing rooms as well as separate libraries. The west wing housed a restaurant, sitting, drawing and smoking rooms as well as 195 beds for the YMCA.

By the 1960s the Institute was struggling to pay for the upkeep and maintenance of the building and it was in need of internal modernisation. It suffered from an awkward layout that meant windows and floors were often at different levels. The decision was taken in 1974 to retain the east wing containing the Bible Training Institute owned by the Glasgow Evangelistic Association and sell off the rest for redevelopment. This fell through due to the planning authority’s insistence that any new development should match the part being retained; a near-impossibility given the extravagance of the original. Sadly, the decision was taken to demolish the entire building and in 1980 Glasgow’s giant Bavarian cake topper was razed to the ground. It may have been architecturally incoherent and over the top, but it had plenty of charm. In its place is a modern glass and granite office block by Holmes Partnership with Newman Levinson and Partners, a building so bland that you might not even notice it’s there.

Also visible in these photos is the Scottish Legal Life Assurance building at 95 Bothwell Street. That’s a story for another post, but it’s worth pointing out that those massive golden clocks at each corner that look like they’ve always been there, were in fact added as recently as 1995.