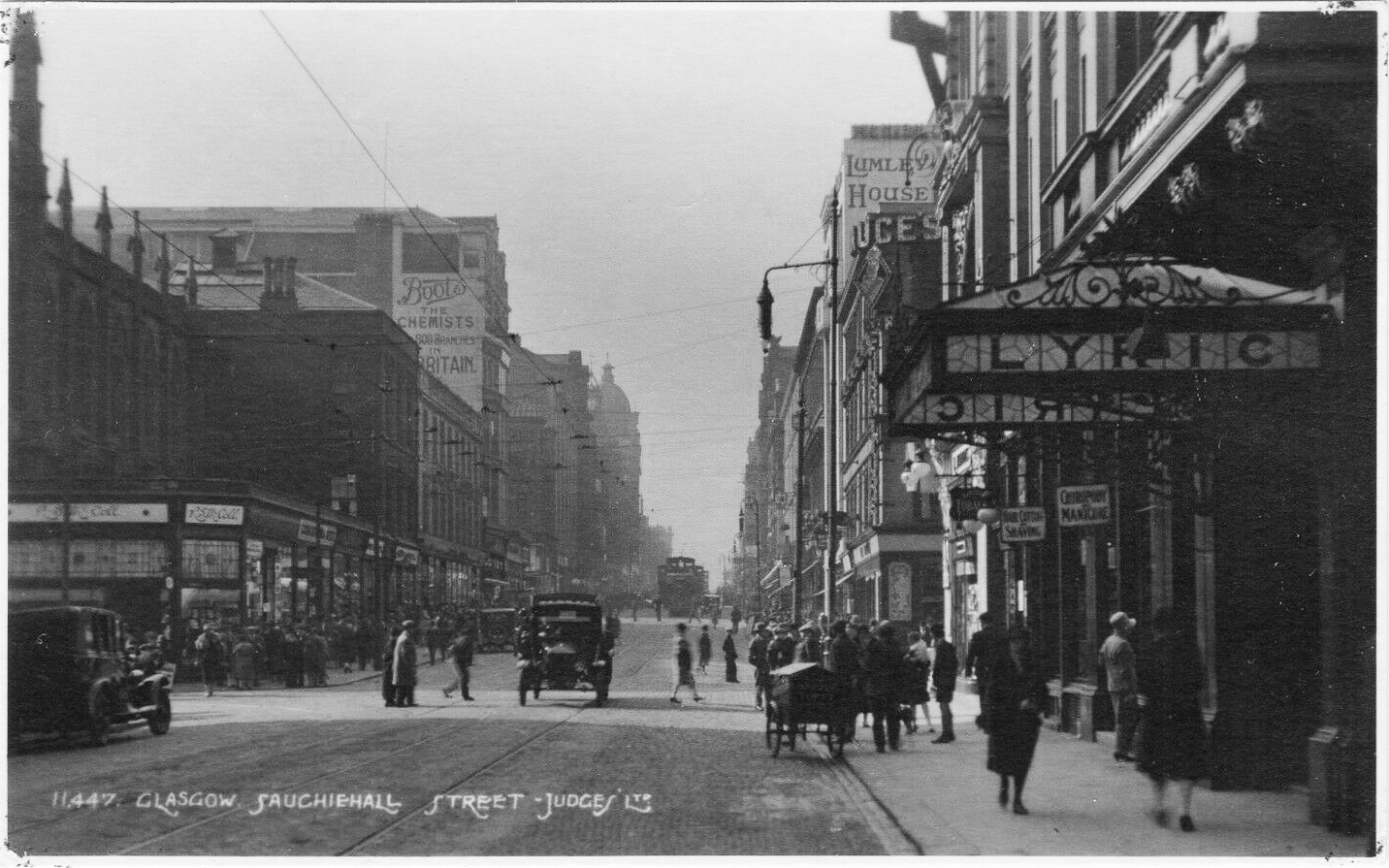 We’re looking west along Sauchiehall St from the corner of Renfield St in this early 20th century postcard view. On the right is the intricate cast iron entrance canopy of the Lyric theatre, while over on the left we can see a branch of R.S. McColl nestled in against the Renfield Street UP Church.

The Lyric began life in 1879 as the Royalty Theatre and owed its existence to a fire earlier that year at the nearby Theatre Royal. Having already commissioned a building from Baird and Thomson to house offices, shops and a hall, the Central Halls Company moved swiftly to incorporate a theatre designed by a young Frank Matcham into their new development.

The Royalty started showing silent films in 1913 under the name Lyric Picture Palace and in 1916 the entire building was purchased outright by the Glasgow United YMCA. They proceeded to alter the building, turning it into a hostel for soldiers and sailors. When the war ended the YMCA started the theatre back up as the Lyric Playhouse, featuring its own Lyric Orchestra.

Disaster struck the Lyric in May 1953 when a fire, thought to have been caused by a discarded cigarette, ravaged the auditorium. The skill and bravery of the fire brigade prevented the spread of the blaze and the adjoining YMCA premises were spared any serious damage.

Plans were immediately put in place to rebuild the Lyric and the YMCA launched a public appeal seeking £30,000 of funding. By November 1953 they’d only raised £3,000. The Lyric was rebuilt, however, at a cost of £112,000 and reopened with a comedy in May 1956. Smoking was not permitted.

Despite all of that, the theatre and the building that housed it did not have long to go and here the story becomes a little fuzzy. Perhaps the YMCA received an offer they couldn’t refuse or maybe, with theatre audiences in decline, the complex was becoming a drain on their finances. Whatever the reasoning, by 1961 the building was in the process of being torn down. In April of that year a 400ft section collapsed into the street, injuring five people and leaving one girl with a miraculous escape: two huge pieces of masonry, colliding as they fell, formed a protective arch over her as she lay on the pavement.

In March 1961 plans proposed by Gula Investments of London for a 17 storey tower with shops were approved. With demolition complete, construction of St. Andrews House began in May 1961. Today it’s a Premier Inn.

I’ve seen variations of this scene many times and have always found the left hand side, where R.S. McColl meets the church, to be quite curious. You don’t often see commercial premises jammed right up against a church wall so it’s interesting to see it from another angle and, sure enough, that parade of shops has been opportunistically inserted into the small corner space.

It was built as Renfield Street United Presbyterian Cathedral in 1849 to designs by James Brown, who had collaborated with JT Rochead on Kew Terrace, Great Western Rd. Like so many of Glasgow’s ecclesiastical buildings, it was simply disposed of when the congregation moved on. It closed in 1964 and the C-listed structure was demolished the following year. Today the corner site is occupied by the rapidly deteriorating former British Home Stores building.