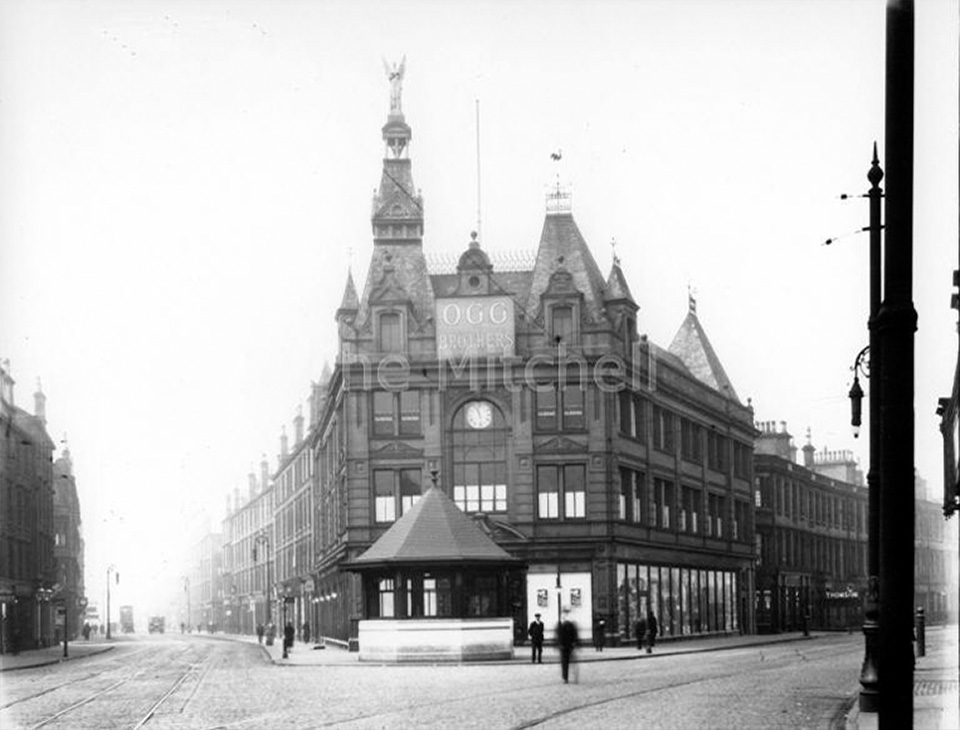 The familiar golden figure of Paisley Road West’s angel soars heavenwards in this circa 1900 shot of Paisley Road Toll. The identity of the sculptor is uncertain but it’s thought to have been the work of Alexander Ewing. The sculpture itself eluded all efforts at identification until 2004 when Gary Nisbet of http://www.glasgowsculpture.com uncovered her name in a long forgotten article in the Govan Press newspaper. “Commerce and Industry” is her Sunday name, but you’ll find few locals who know her as such.

The substantial gushet block that now houses an Italian restaurant was built in 1889 as Ogg Brothers’ Drapery Warehouse, an outfitters known for supplying uniforms to merchant seamen. It was designed by Bruce and Hay and occupies the site of the former barhouse toll-bars of Three Mile House, Paisley Road and the old Govan/Renfrew Road. Three Mile House was a hamlet on the Paisley Road that would also come to be known as Halfwayhouse or Halfway. The fabric of the building isn’t much changed, although we’ve lost a few decorative roof ornaments, including a weather vane. The modern day signage of long-established restaurant “La Fiorentina” is sadly typical, and tends to dominate the ground floor. The second image shows the Old Toll Bar which has thankfully survived the upheaval and destruction of the surrounding area. It opened in 1874 and its lavish interior was added in 1893. It remains the best preserved example of a “palace pub” in the city, featuring rich dark woodwork, fine classical style painted glass, large engraved advertising mirrors, and an elaborate carved gantry. All of this was almost lost in January 2014 when a load-bearing wall was accidentally dismantled in the basement, rendering the entire block unsafe. With remedial structural work completed, and a sympathetic makeover from new owner Mido Soliman, the Old Toll Bar re-opened in October 2016.

The area to the west of the toll is known as Plantation, a name given by Glasgow merchant John Robertson after he acquired the Craigiehall Estate in 1783. It has long been supposed that this name derives from Robertson’s own overseas interests, but a 1741 estate map produced by Robert Ogilvy for Sir John Maxwell of Blawarthill shows a patch of woodland here marked as “Plantation”, a common enough practice that simply denotes an area of newly planted trees. When John Robertson purchased the estate in 1783 there stood a small house in green fields at what would be the top end of modern day Mair Street. It was then acquired by John Mair (after whom the street is named)  in 1793 who set about upgrading and expanding the building into the fine house you see above. The area was feued for tenement development throughout the 1870s and by 1878 Plantation House was in disrepair. It was finally demolished in 1900. Photograph reproduced with the kind permission of Glasgow City Archives.

Leaving the toll behind we arrive at Kingston Halls and Library. Designed by Robert William Horn of the City Engineer’s Department, it was opened on 8th September 1904 by Lord Provost Sir John Ure Primrose who declared that “We are citizens of no mean city”. Kingston was the first Carnegie-funded library in the city. The building suffered a major fire in 1948 but was rebuilt and reopened in 1957. It finally closed in 1981 following years of depopulation in the area resulting from the development of the Kingston Bridge and associated motorway infrastructure. Ibrox library opened nearby that same year and Kingston served for many years as a homeless night shelter before homeless charity the Talbot Association took up residence.

Photos reproduced with the kind permission of Glasgow City Archives

Architecturally Horn modeled the hall after J.J. Burnet’s athenaeum, giving it a three bay Edwardian Baroque front rendered in red sandstone. The library entrance is set to the right hand side and features a figure of learning in the aedicule above the door. In 2010 it survived another brush with fire when the neighbouring tenement burnt down. The hall and library now sit orphaned on Paisley Road in front of the Springfield Quay entertainment complex, an ugly advertising hording pitched in the space vacated by the its former tenement neighbour.