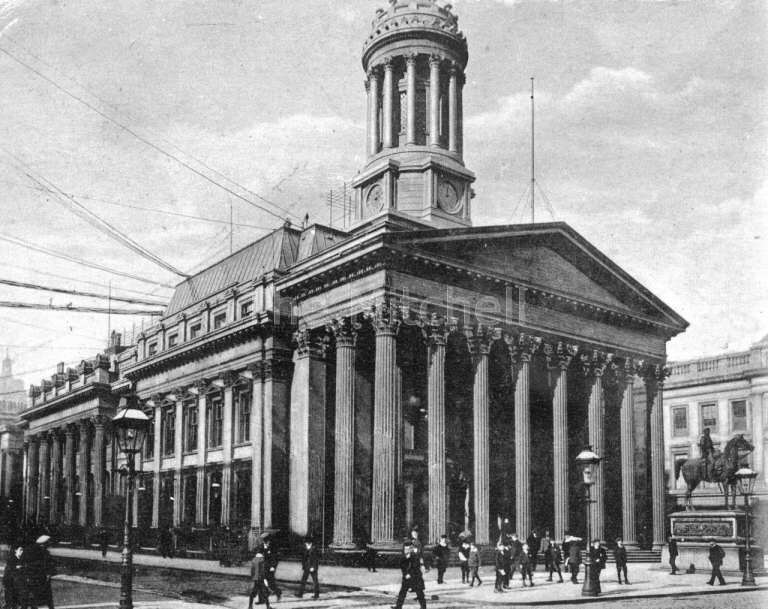 Photo (C1202): Sourced from Virtual Mitchell and reproduced with the kind permission of Glasgow City Archives.

The former Royal Exchange looks stunning against a blue winter sky as it rises majestically over the surrounding square. Back in 1906 Baron Carlo Marochetti’s equestrian statue of the Duke of Wellington hadn’t yet acquired his familiar headgear. It’s a building on a monumental scale that almost fills Royal Exchange Square. But this wasn’t always the case. It’s now familiar to Glaswegians as the Gallery of Modern Art, but it started off as a tobacco merchant’s mansion when it was built between 1778 and 1780. William Cunninghame of Lainshaw was already a wealthy man before he made an even greater fortune by stockpiling cheap tobacco shortly before the American War of Independence. He speculated that a long war in the colonies would disrupt supply chains, resulting in a tobacco shortage. He was proved right and, having bought at 3 pence per pound, sold his stock for 3 shillings and sixpence per pound. Little comfort for the slaves who picked his crop and gave their lives in the process.

His original house of 1780 is in the middle section of the Royal Exchange, between David Hamilton’s later additions to the front and rear. Once you see that the building is really in three distinct sections you won’t be able to unsee it. Cunninghame died in 1799 and in 1817 the house was acquired by the Royal Bank of Scotland to become their first branch outside of Edinburgh. In 1827 the Royal Bank sold the building to the city so that it could be converted into a new mercantile exchange. This work was completed in 1829 to plans by David Hamilton. Hamilton encased the original house on both sides, with its two stories and attic articulated by giant pilasters. To the front he added a double depth portico of fluted Corinthian columns topped by a circular tempietto. To the rear he added a newsroom, considered to be Glasgow’s most magnificent early c19th interior. This addition was always lower than the original house, although the pilasters continue. However, the ground floor windows are arched while the first floor is half a storey with square ones. The exterior is completed by a free-standing colonnade of fluted columns on either side. The Royal Bank of Scotland built new premises facing their former home in 1834, a building that now houses Zizzi restaurant at the front, and All Saints facing onto Buchanan Street.

Glasgow’s first telephone exchange opened here in 1880 and, ironically, it was the increasing use of telephones and other long distance communication methods that made a physical exchange increasingly unnecessary. In 1949 the Royal Exchange was acquired by Glasgow Corporation and in 1954 Stirling’s Library was relocated here from Miller Street. The library moved back to Miller Street in 1994 so the building could be converted to house the city’s modern art collection. Stirling’s Library finally returned to the Gallery of Modern Art and is now The Library at GoMA.