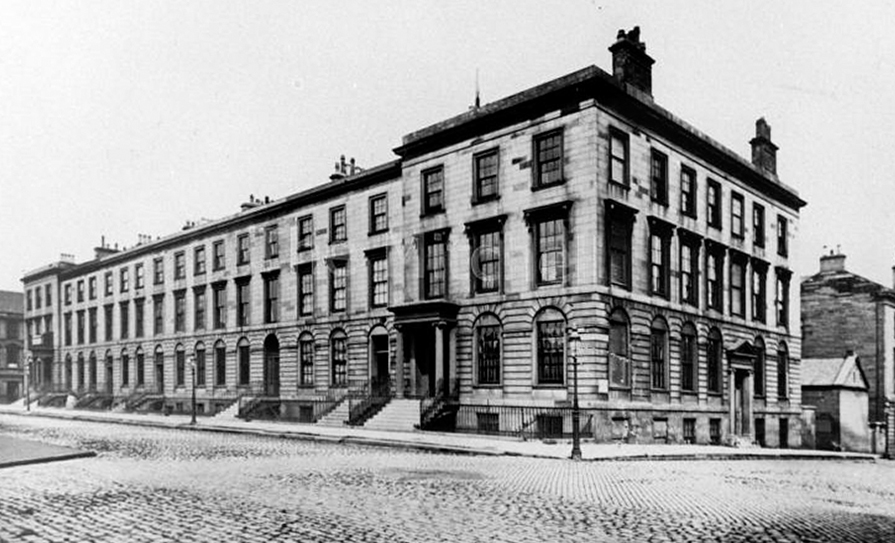 Photo (C1804): Sourced from Virtual Mitchell and reproduced with the kind permission of Glasgow City Archives.

The cobbles are gone and cars now line the streets, but the north side of Blythswood Square is little changed from this c1860 view. Blythswood Square was the hub of Blythswood New Town, one of several planned developments that helped transform the city from its medieval origins. Blythswood New Town was laid out on the former Blythswood Estate of Colin Campbell and stretched from Argyle Street to Garnethill, and from West Nile Street to Pitt Street. It was initiated in 1821 by William Hamilton Garden who bankrupted himself promoting it. The square was laid out between 1823 and 1829 after William Harley took over. John Brash executed the facades, probably from a design by William Burn.

More interesting than the buildings themselves is the scandal that erupted here in 1857. No 7 (closest to us in the photo) was home to Madeleine Smith, a young Glasgow socialite and daughter of wealthy architect James Smith. In 1855, and at odds with Victorian social convention, she entered into an affair with apprentice nurseryman Pierre Emile L’Angelier. When her father found a suitable fiancé for her to marry, she tried to end the relationship only for L’Angelier to attempt blackmail. He threatened to use the letters Madeleine had sent to force her to marry him. She was seen ordering arsenic in the druggist’s office soon after. On the 23rd March 1857 L’Angelier succumbed to arsenic poisoning and is buried in the Ramshorn Cemetery on West Nile Street.

Despite the clear circumstantial evidence, the jury returned a “not proven” verdict. Madeleine fled Scotland soon after, first to England where she married artist George Wardle in 1861. They had a daughter Mary (known as “Kitten” b. 1863) and a son Thomas (b. 1864). Madeleine and George separated in 1889 and she then moved to New York City. In 1916, at the age of 81, she married a second time to William A. Sheehy. This lasted until his death in 1926. Madeleine Smith died in 1928 aged 93 and was buried as Lena Wardle Sheehy.