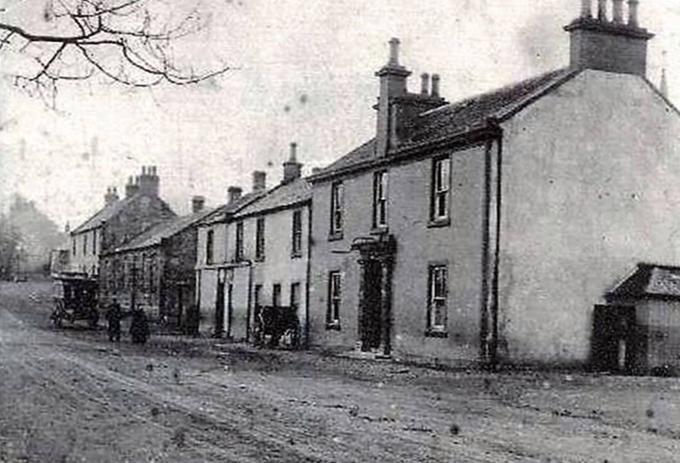 The village of Eaglesham is situated in East Renfrewshire, about eight miles south of Glasgow. In 2011 the population of Eaglesham was 3,114.

At the heart of this beautiful place is the 18th century planned village. Many of its buildings are grade ‘B’ or ‘C’ listed but, as a whole, the village is ‘A’ listed.

In 1769 Alexander Montgomerie, 10th Earl of Eglinton, began the work of developing the old kirktoun of Eaglesham into an elegant planned village with two ranges of houses — Polnoon Street and Montgomery Street — built around the Orry. This area of common land was planted with trees and lawns and with a rivulet running down the middle, intended for the common good.

In the 19th century, the main industries were cotton spinning, weaving and farming. There were several cotton mills, one situated in the Orry employing 200 workers by around 1840, and the other on the nearby Millhall Estate at Polnoon.

The photograph shows the Eglinton Arms Hotel, located at 59 Gilmour Street. It was built around 1835 as a coaching inn with later alterations and additions. The building features an unusual, three flue, shouldered wall head chimney and Roman Doric pilastered and corniced doorpiece.